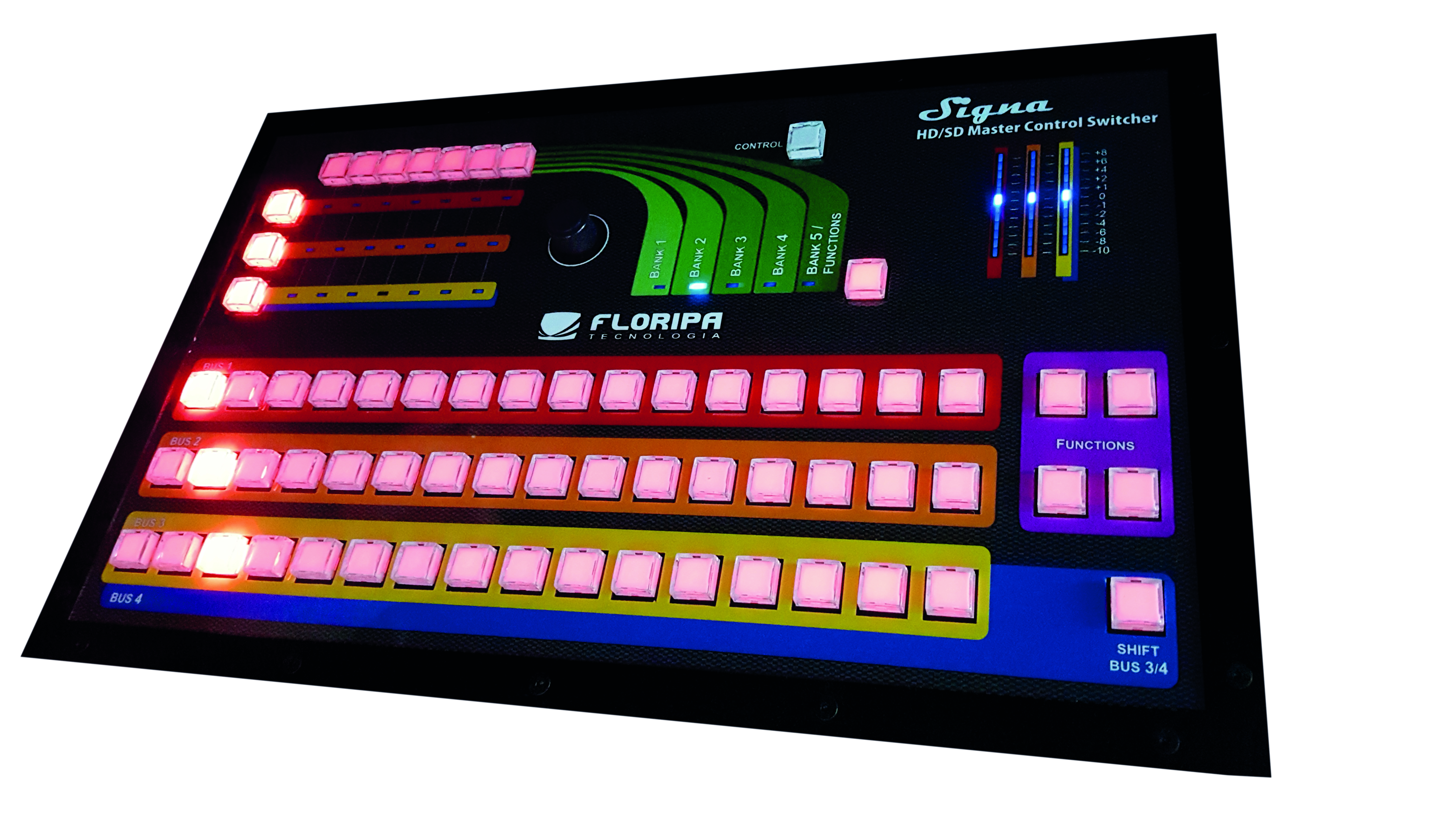 The highlight of Floripa at the Products and Services Trade Show of SET EXPO 2017 is the new version of the Signa soundboard with new playout, character generator, audio mixer and loudness processor modules. These modules are remotely controlled from any PC. Users have independent controls of video playlists, graphic insertions and character generators for each soundboard output channel, and can also control a 16-channel audio mixer.

Check out below the specifications provided by the company:

Signa Playout: Enables video playlists to be displayed using the on-board hardware of the Signa soundboard as an independent video server. It can be used to display HD and SD files. It is compatible with MOV, MXF, MP4 and AVI (selected codecs). The playlist is also equipped with controls that can be used on the keys of the soundboard, such as Play, Stop, Pause and Next Video. All playlists are handles using a client software that runs on an auxiliary PC where it is possible to generate sequences and create and import display lists. The Signa Playout display does not take up a physical input channel of the soundboard, and can be used jointly with the all the SDI inputs available.

Signa GC: An all-in character generator with up to four independent channels, namely: layer controls, generation of static and animated logos, clocks, chronometers, animated and static strips and roll and crawl text. Individual screen insertion control, enabling precise insertion and removal of graphic elements. Creation and use of screen and character models for standardized and rapid creation of insertions. The Signa GC is entirely controlled and managed using a client software that runs on an auxiliary PC, permitting operation of the characters without interfering in the operations of the soundboard. The Signa GC does not take up physical input channels of the soundboard, and can be used jointly with the all the SDI inputs available.

Signa Mixer: a 16-channel virtual audio mixing soundboard. Affords individual control of audio levels on each of the 16 channels, in addition to exhibiting bar graph VUs for all of them. It is possible to choose the input groups that will use the audio from this mixer, supplementing camera cropping in small and mid-size studios. Besides the new modules, the latest version of the Signa Soundboard has loudness control and monitoring on all PGM outputs (new feature), 04 advanced and configurable Chroma Keys (new feature), remapping of audio channels (new feature), Frame Synchronizer on inputs and outputs, Up/Down Scaler on all inputs and outputs, independent graphics and character generator on all outputs, multiviewer complete with all inputs and outputs, with closed caption monitoring, 16 audio channels and loudness indications, up to 02 external DSKs, 04 over audio, 04 advanced (twin or single) takes, personalized configuration for all keys on the (macro) remote panel, among other resources.

Besides the Signa, the company will exhibit the time-honored SpotWare Video Servers, Shiftware time-delay and programming adjustment systems and CGWare Character Generator, among other products. Just a reminder: Floripa is the authorized outlet for the following manufacturers: JVC, Panasonic, Blackmagic Design, COBALT, AJA, Weelav/Sencore, Newtek, Leader, Matrox, PTZ Optics and others, as well as the integrator of a range of brands.

The company will be on booth 69 on Street B4 of the SET EXPO.  Access the floor plan here.

SET EXPO will take place between August 21 and 24, 2017, at the Expo Center Norte in São Paulo. Registration for the Products and Services Trade Show is free and can be done using this link.